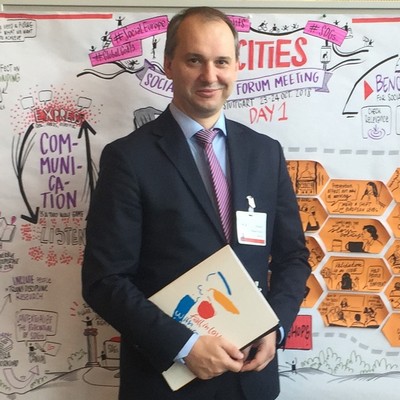 Tomasz Pactwa has been the Director of the Welfare and Social Projects Department at the City of Warsaw since September 2012. He manages the department, which consists of 10 units. He coordinates implementation of the Warsaw Social Strategy and several thematic programs forming the social policy framework in Warsaw. His team elaborates new programs and projects in a field of social policy. Social innovations using IT technologies created by his team have gained international recognition: Bloomberg Philanthropies’ Mayors Challenge EUROPE for project Virtual Warsaw – winning team, Smart 50 Awards 2018 by Smart Cities Connect Foundation for project Looked @fter. Previously (2007-2012)

Tomasz Pactwa held the position of Deputy Director of the European Funds Department at the City of Warsaw, where he supervised the process of the social projects preparation, verification of the programs and projects aiming at engagement of local communities in a decision making process, projects management. He also contributed to the Access City Award 2020 awarded for the overall improvement to the city’s ease of access in a short space of time.